"By Heaven with its returning system...." 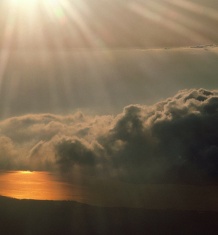 "By Heaven with its returning system" (I)

The Scientific Facts:
Facets of Scientific Inimitability:
This honourable verse indicates that the most prominent characteristic of the sky is that it is a returning system. Previously, people thought that this verse meant the return of water in the form of rain, but modern science added many additional meanings to the word "returning" that were previously unknown. The sky here means the atmosphere and this verse shows that the sky has a surrounding cover that returns every useful thing to the earth and hinders every harmful thing from reaching it.
Therefore, the word "returning" has many indications; more than just the return of rain. Without the benefits of the returning system, life on earth would be impossible.
Thus, the Ever-Glorious Qur'an revealed many modern discoveries in one word, many centuries ago.
(I) Surah At-Tariq: V 11
Source: International Commission on Scientific Signs in the Qur'an and the Sunnah [External/non-QP]