Who sends down water (rain) from the sky? 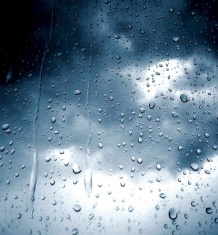 Surat Al-AnŌĆÖam was revealed in Makkah and is one of the longest chapters in the QurŌĆÖan with 165 verses. This surah gets its name from the many references it makes to cattle. One of the main attributes of this surah is that it was revealed to the Prophet Muhammad (PBUH) at one time. It deals mainly with Islamic doctrines and legislation and mentions the stories of some of the prophets and messengers who came before Muhammad (PBUH) and of some previous nations. A number of verses that refer to signs of creation and the divine creative ability of Allah prove that the stories mentioned in this surah are real and bear witness to His Oneness, exclusive of partners, peers, rivals, companions or offspring.
Surat Al-AnŌĆÖam begins with the verse that can be translated as, ŌĆ£All praises and thanks be to Allah, Who (Alone) created the heavens and the earth, and originated the darkness and the light; yet those who disbelieve hold others as equal with their Lord.ŌĆØ This verse means that the disbelievers liken The Creator, Protector, Lord and Sovereign of the heavens, the earth and all that is in them to the creatures they worship or the idols they have created themselves. The surah rejects this disgraceful attitude of the disbelievers and polytheists. It emphasizes the fact that it is Allah (SWT) who created man from earth and determined the moment of death and resurrection for all creatures. Many people, however, deny the resurrection and doubt its inevitability.
Signs of creation in Surat Al-AnŌĆÖam
Each of these items needs to be addressed individually, thus I shall focus my discussion on the twelfth point above which talks about chlorophyll (the substance that makes plants green) and photosynthesis which is essential for plants to produce seeds. Before addressing this point, I will first mention some interpretations of this verse by classical and contemporary scholars.
Interpretations of the verse by scholars
Botanists have commented on this verse saying that it sheds light on the way plants are created and develop at different stages until they reach complete maturity and contain all the fats, proteins and carbohydrates they require. This is all synthesized in sunlight through the presence of a green substance called chlorophyll, found in all green plants and particularly in their leaves. This is where these compounds are synthesized and then distributed to seeds and fruits. Moreover, the verse affirms that rainwater is the only source of fresh water on earth and solar energy is the source of energy for all living creatures. Plants, however, can only store solar energy through chlorophyll and then pass it on to humans and animals through the organic nutrients they synthesize. Science has revealed an amazing fact that proves the Oneness of the Creator; hemoglobin, which is necessary for respiration in both humans and animals, is similar to chlorophyll. The active sites of both hemoglobin and chlorophyll are a porphin molecule. In hemoglobin, carbon, hydrogen, oxygen and nitrogen atoms of this porphin molecule enclose an iron atom while in chlorophyll it encloses a magnesium atom. Medical research has also proved that once chlorophyll has been metabolized by the human body it is assimilated into its tissues, strengthens them and helps them destroy bacteria, providing protection against diseases. At the end of this verse, Allah (SWT) says what can be translated as, ŌĆ£Look at their fruits when they begin to bear, and the ripeness thereof.ŌĆØ  This reference preceded modern botany in relying on the examination of the external form of plant organs in their different stages.
In Safwat al-Tafassir, Allah says what can be translated as, ŌĆ£It is He Who sends down water (rain) from the sky, and with it We bring forth vegetation of all kindsŌĆØ. Allah (SWT) sends down rain from clouds bringing forth all vegetation, such as fruits, legumes, grass and trees; ŌĆ£and out of it We bring forth green stalks,ŌĆØ meaning that we bring forth a tender green part; ŌĆ£from which We bring forth thick clustered grain,ŌĆØ meaning that we bring forth grains clustered one on top of each other like spikes of barley and wheat. Ibn Abbas said: ŌĆ£It means wheat, barley, corn and riceŌĆØ.
The scientific implications of the verse

ŌĆ£It is He Who sends down water (rain) from the sky,ŌĆØ