The link between the formation of mountains & rivers and paths 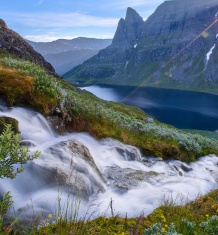 āAnd He has affixed into the earth mountains standing firm, lest it should shake with you; and rivers and roads, that you may guided yourselvesā (I)

This ayah appears towards the beginning of Surah An-Nahl (The Bee), a Makkan Surah, which gets its name from the reference Allah makes in it to bees and the special instinct He gave them. He has inspired them to build beehives, to live an organized life and to follow many paths to the flowers to provide us with the beneficial liquid that is produced in the bellies of female bees. Allah has given bees the unique privilege of being able to produce honey.
Surah An-Nahl deals with a lot of important concepts that make up the pillars of the Islamic Aqeeda (creed), including:
Signs of creation in Surah An-Nahl:
This Surah mentions many signs of creation that give evidence of the divinity of Allah as reflected in the greatness of His creation. The Surah also mentions the many blessings of Allah on His worshippers in His perfect knowledge, the greatness of His wisdom and His precise planning, including:
Interpretation of these ayahs by some scholars:
Concerning the interpretation of the following ayahs,

āAnd He has affixed into the earth mountains standing firm, lest it should shake with you; and rivers and roads, that you may guided yourselves.ā (I).

Ibn-Kathir said: āMountains standing firmā means that Allah created the earth with its strong pillars and deeply rooted mountains which stabilize the earth and prevent it from shaking and disturbing life on Earth.
As for the words, ārivers and roadsā, Allah created rivers that run from one place to another providing sustenance for believers. They originate in one place and provide sustenance for the inhabitants of other places and cut across landscapes, wildernesses and wastelands, they cut through hills and mountains. They pass through whatever Allah has willed and destined for them. He has also made paths that lead from one land to another, even through mountains, as He says, āAnd We have made in them pathsā.
Scientific implications in these ayahs:
One of the scientific facts mentioned in these ayahs is the use of the word āpeggingā to describe the formation of mountains, their stabilizing function for the Earth and linking it to the creation of rivers and mountain paths.
Describing the formation of the mountains as āpeggingā:
A mountain is a part of the earthās surface much higher than the land surrounding it; it has relatively steep sides and a summit. Mountains are usually found in chains, ranges or systems. Apart from certain mountains that exist singly, the smallest unit is the range, made up of either a single complex ridge or a series of ridges generally alike in origin, age, and form. Several closely related ranges, in parallel alignment or chain-like cluster, are known as a mountain system. An elongated series of systems forms a mountain chain and an extensive complex of ranges, systems and chains is known as a belt or cordillera.
There are two theories to explain the origin of mountains in the earth.
The Geosynclines Theory:

There were large depositional basins from seas and oceans ranging from hundreds of kilometres in length, tens of kilometres in width to more than one hundred meters depth. Many clastic and non-clastic types of sediments were deposited and accumulated in the floors of theses basins, in the form of throwing from up to down to form sedimentary rocks. The continuous thickening of these rocks caused loads and led to subsidence of the basin floor. This subsidence was accompanied by volcanic activity in the form of eruptions throwing the lava upwardly. The result was a thick intercalated sequence (about 1500m thick) form sedimentary and volcanic rocks. However, the depositional basins are bounded by active deep rifting faults which keep the continuous subsidence of the basins and two opposite wards the processes of deposition downwardly and the eruption of lava upwardly.