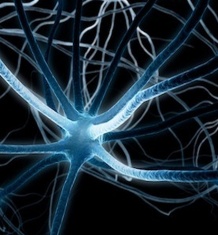 â€śSurely! Those who disbelieved in Our Ayat (proofs, evidences, verses, lessons, signs, revelations, etc.) We shall burn them in Fire. As often as their skins are roasted through, We shall change them for other skins that they may taste the punishment. Truly, Allah is Ever Most Powerful, AllÂ­ Wiseâ€ť (I)

Referring to the dwellers of the Fire, Almighty Allah also says:

â€śâ€¦ and be given, to drink, boiling water, so that it cuts up their intestines?â€ť (II)

The Scientific Fact:
Before the age of scientific discovery, it was commonly believed that the whole human body could feel pain. It was not until the role of nerve endings in the skin were discovered, that people learned about the existence of certain nerve endings which transmit feelings of pain to the brain. The skin is associated with sensitivity because it contains the majority of nerve endings.
According to Dr. Headâ€™s classification of the skinâ€™s sensitivity, there are two groups of feelings:
Each of these categories uses certain nerve cells in addition to other receptors for sensing any environmental change. These receptors can be categorized into four kinds:
Anatomists have proved that people whose skin has been completely burnt cannot feel pain because their nerve endings are damaged. This is different from a person who has a second-degree burn, for he will experience severe pain as his nerve endings are not damaged, but are rather, uncovered.
Anatomists have also proved that the small intestines do not have any receptors. However, receptors can be found between the peritoneum and the outer layer of the intestines. This area contains a lot of small bodies known as pacini. The size of the peritoneum is 20,400 cubic centimetres, which makes it equal to the size of the outer layer of the skin. Also, the receptors of the intestines are similar to those in the skin.
Facets of Scientific Inimitability:
These facts show the miraculous scientific nature of the Ever-Glorious Qur'an which related these facts to mankind a long time before modern science was able to give any information about them.
(I): Surah An-Nisaâ€™: V 56
(II): Surah Muhammad: V 15
Source: International Commission on Scientific Signs in the Qur'an and the Sunnah [External/non-QP]