The Concept of God in Islam: A Unique Concept 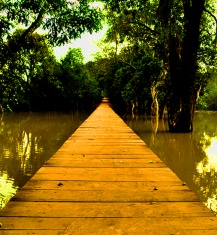 It is a known fact that every language has one or more terms that are used to refer to God and sometimes to lesser deities at the same time.  This is not the case with Allah.  Allah is the personal name of the One true God.  Nothing else can be called Allah.  The term has no plural or gender.  This shows its uniqueness when compared with the word ŌĆ£god,ŌĆØ which can be made plural, as in ŌĆ£gods,ŌĆØ or made feminine, as in ŌĆ£goddess.ŌĆØ  It is interesting to note that Alah is the personal name of God in Aramaic, the language of Jesus and a sister language of Arabic.

The One true God is a reflection of the unique concept that Islam associates with Allah.  To a Muslim, Allah is the Almighty Creator and Sustainer of the universe, Who is similar to nothing, and nothing is comparable to Him.  The Prophet Muhammad was asked by his contemporaries about Allah; the answer came directly from Allah Himself in the form of a short chapter of the Quran, which is considered to be the essence of the unity or the motto of monotheism.  This is chapter 112, which reads:

ŌĆ£Say (O Muhammad), He is Allah, the One God, the Self-Sufficient, who has not begotten, nor has been begotten, and equal to Him is not anyone.ŌĆØ

Some non-Muslims allege that God in Islam is a stern and cruel God who demands to be obeyed fully and is, consequently, not loving and kind.  Nothing could be farther from the truth than this allegation.  It is enough to know that, with the exception of one, each of the 114 chapters of the Quran begins with the verse, ŌĆ£In the name of God, the Merciful; the Compassionate.ŌĆØ  In one of the sayings of Prophet Muhammad, may the mercy and blessings of God be upon him, we are told that:

ŌĆ£God is more loving and kind than a mother to her dear child.ŌĆØ

On the other hand, God is also Just.  Hence, evildoers and sinners must have their share of punishment, and the virtuous must have GodŌĆÖs bounties and favors.  Actually, GodŌĆÖs attribute of Mercy has full manifestation in His attribute of Justice.  People suffering throughout their lives for His sake should not receive similar treatment from their Lord as people who oppress and exploit others their whole lives.  Expecting similar treatment for them would amount to negating the very belief in the accountability of man in the Hereafter and thereby negate all the incentives for a moral and virtuous life in this world.  The following Quranic verses are very clear and straightforward in this respect.

ŌĆ£Verily, for the Righteous are gardens of Delight, in the Presence of their Lord.  Shall We then treat the people of Faith like the people of Sin?  What is the matter with you?  How judge you?ŌĆØ (Quran 68:34-36)

Islam rejects characterizing God in any human form or depicting Him as favoring certain individuals or nations on the basis of wealth, power or race.  He created human-beings as equals.  They may distinguish themselves and get His favor through virtue and piety only.

The concepts, such as God resting on the seventh day of creation, God wrestling with one of His soldiers, God being an envious plotter against mankind, or God being incarnate in any human being, are considered blasphemy from the Islamic point of view.

The unique usage of Allah as a personal name of God is a reflection of IslamŌĆÖs emphasis on the purity of the belief in God that is the essence of the message of all GodŌĆÖs messengers.  Because of this, Islam considers associating any deity or personality with God as a deadly sin that God will never forgive, despite the fact that He may forgive all other sins.

The Creator must be of a different nature from the things created because, if He is of the same nature as they are, He will be temporal and will therefore need a maker.  It follows, therefore, that nothing is like Him.  Furthermore, if the Maker is not temporal, then He must be eternal.  If He is eternal, however, He cannot be caused, and if nothing caused Him to come into existence, nothing outside Him causes Him to continue to exist, which means that He must be self-sufficient.  And if He does not depend on anything for the continuance of His own existence, then this existence can have no end, so the Creator is, therefore, eternal and everlasting. Hence we know that He is Self-sufficient or Self-subsistent, and Everlasting or, to use a Quranic term, Al-Qayyum:   ŌĆ£He is the First and the Last.ŌĆØ

The Creator does not create only in the sense of bringing things into being, He also preserves them and takes them out of existence and is the ultimate cause of whatever happens to them.

ŌĆ£God is the Creator of everything.  He is the guardian over everything.  Unto Him belong the keys of the heavens and the earthŌĆ”ŌĆØ (Quran 39:62-63)

ŌĆ£No creature is there crawling on the earth, but its provision rests on God.  He knows its lodging place and its repository...ŌĆØ (Quran 11:16)

If the Creator is Eternal and Everlasting, then His attributes must also be eternal and everlasting.  If this is so, then his attributes are absolute.  Can there be more than one Creator with such absolute attributes?  Can there be, for example, two absolutely powerful Creators?  A momentŌĆÖs thought shows that this is not feasible.

The Quran summarizes this argument in the following verses:

ŌĆ£God has not taken to Himself any son, nor is there any god with Him: for then each god would have taken of that which he created and some of them would have risen up over others.ŌĆØ (Quran 23:91)

ŌĆ£And why, were there gods on earth and heaven other than God, they (heaven and earth) would surely go to ruin.ŌĆØ (Quran 21:22)
The Oneness of God

The Quran reminds us of the falsity of all alleged gods.  To the worshippers of man-made objects it asks:

ŌĆ£ŌĆ”Or have you taken unto yourself others beside Him to be your protectors, even such as have no power either for good or for harm to themselves?...ŌĆØ (Quran 13:16)

To the worshippers of heavenly bodies it cites the story of Abraham:

In order to be a Muslim, that is, to surrender oneself to God, it is necessary to believe in the oneness of God, in the sense of His being the only Creator, Preserver, Nourisher, etc.  But this belief is not enough.  Many of the idolaters knew and believed that only the Supreme God could do all this.  But this was not enough to make them Muslims.  In addition to this belief, one must acknowledge the fact that it is God alone who deserves to be worshipped, and thus abstains from worshipping any other thing or being.

Having achieved this knowledge of the one true God, man should constantly have faith in Him, and should allow nothing to induce him to deny truth.

What this means is that, if one submits knowingly to God without reservations, and admits He is the only one worthy of your worship, one must consequently worship Him. That is, knowing we owe Him obedience means putting into practice what we acknowledge in our hearts. God asks, rhetorically:

ŌĆ£Did you think that We had created you in without purpose, and that you would not be brought back to Us?ŌĆØ (Quran 23:115)

ŌĆØI did not create Mankind and Jinn except that they should worship me.ŌĆØ (Quran 51:56)

Hence, when faith enters a personŌĆÖs heart, it causes certain mental states that result in certain actions.  Taken together, these mental states and actions are the proof for the true faith.  The Prophet, may the mercy and blessings of God be upon him, said:

ŌĆ£Faith is that which resides firmly in the heart and which is proved by deeds.ŌĆØ

Foremost among these mental states is the feeling of gratitude towards God, which could be said to be the essence of worship.

The feeling of gratitude is so important that a non-believer is called ŌĆśkafirŌĆÖ, which means ŌĆśone who denies a truthŌĆÖ and also ŌĆśone who is ungratefulŌĆÖ.

A believer loves, and is grateful to God for the bounties He has bestowed upon him, but being aware of the fact that his good deeds, whether mental or physical, are far from being commensurate with Divine favors, he is always anxious lest God should punish him, here or in the Hereafter.  He therefore fears Him, surrenders himself to Him and serves Him with great humility.  One cannot be in such a mental state without being almost all the time mindful of God.  Remembering God is thus the life force of faith, without which it fades and withers away.

The Quran tries to promote this feeling of gratitude by repeating the attributes of God very frequently.  We find most of these attributes mentioned together in the following verses of the Quran:

ŌĆ£There is no god but He, the Living, the Everlasting.  Slumber seizes Him not, nor sleep.  To Him belongs all that is in the heavens and the earth.  Who is there that shall intercede with Him save by His leave?  He knows what lies before them, and what is after them, and they comprehend not anything of His knowledge save such as He wills.  His footstool extends over the heavens and the earth.  The preserving of them oppresses Him not; He is the All-High, the All-Glorious.ŌĆØ (Quran 2:255)

ŌĆ£People of the Book, go not beyond the bounds in your religion, and say not as to God but the truth.  The Messiah, Jesus, son of Mary, was only the Messenger of God, and His Word that He laded on Mary, and a Spirit from Him.  So believe in God and His Messengers, and say not ŌĆ£ThreeŌĆØ.  Refrain; better it is for you.  God is only one God.  Glory be to Him ŌĆō (He is) above having a son.ŌĆØ (Quran 4:171)

Thus we have three parts to our acknowledgement of God as the Only True God. We must believe he is the ultimate Creator, Controller and Judge of the universe and everything in it; we must refrain from the worship of anything except Him, and then actually direct our Worship to Him; and we must know that He alone has all the divine attributes and names, and we cannot apply them to any other being, no matter who they are.   If one merely acknowledges with oneŌĆÖs lips these necessities, even should we refrain from applying them to other gods, it is not enough. They must be sincerely directed to the One you acknowledge as well.