STARS THAT HIDE AND MOVE SWIFTLY 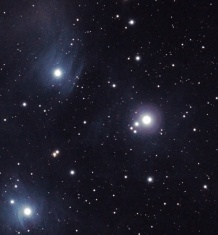 Black holes are the late stages of the life of gigantic stars which are five times larger than the sun. These stars are of great density and gravity that they almost gravitate everything even light whose speed is 300,000 km/. Therefore, they are given this name (i.e. black holes) because anything that approaches them disappears, and they are seen as black holes in space.

These giant hidden stars sweep away anything in their way including other stars and that is why they are called gigantic vacuum-cleaners. These facts are proven by the calculations made by Karl Schwars Child in 1916 and Robert Oppenheimer in 1934. Since 1971, the existence of such black holes in space has become more and more probable. For instance, scientists believe that our galaxy (the Milky Way) is considered one of these black holes.

Allah, the Almighty, swore by these things to confirm the fact that the Ever-Glorious Qur'an is a Divine revelation. He (Exalted and Glorified be He) says:

ŌĆ£So verily, I swear by the stars that recede (i.e. disappear during the day and appear during the night). And by the (cleaning) stars that move swiftly and hide themselves. And by the night as it departs; And by the dawn as it brightens; Verily, this is the Word (this Qur'an brought by) a most honourable messenger [Jibril (Gabriel), from Allah to the Prophet Muhammad (Peace be upon him)ŌĆØ (II)

The importance of this kind of confirmation lies in the object used for swearing here, which is described in a way tantamount to black holes, the black holes are running stars that move in their poles, and hide themselves after having been obvious, as they are at the end of their lives. They produce no light due to their gravity which enables them to gravitate everything in their way and clear their way by swallowing up everything around. The Ever-Glorious Qur'an describes them as being ŌĆścleanersŌĆÖ in conformity with the scientific description. The QurŌĆÖanic description which confirms the scientific one stands as decisive evidence that the Ever-Glorious Qur'an is the true word of Allah - Glory be to Him.

Source: International Commission on Scientific Signs in the Qur'an and the Sunnah [External/non-QP]