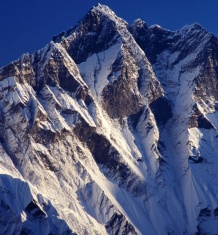 In 12 distinctive verses, the Qurâ€™an (which is principally a book of divine guidance) outlines the basic geologic concepts of mountains as follows:
That mountains are not just the lofty elevations seen on the surface of the Earth, but their downward extensions in the Earthâ€™s lithosphere (in the form of pegs or pickets) is highly emphasized. In as much as most of the picket (or peg) is hidden in either soil or rock to hold one end of the tent to the ground surface, most of the mountain must be hidden in the Earthâ€™s lithosphere. The term â€śpicketâ€ť or â€śpegâ€ť is both literally and scientifically more correct than the term â€śrootâ€ť which is currently used for mountains. In Chapter 78 (I), verses nos. 6 and 7, the Qurâ€™an reads:
"Have We not made the earth as a bed, And the mountains as pegs?"
In 10 other verses, the Qurâ€™an emphasizes the role of mountains as stabilizers for the Earthâ€™s outer surface (or lithosphere). These verses read:
To elaborate on this function of mountains as stabilizers for the Earth, Prophet Muhammad (Pbuh) is reported to have said, â€śWhen Allah created the Earth, its surface started to move and shake and then Allah stabilized it by mountains." (Imam Ahmad, Musnad 3/124)
In the twelfth verse of this group, the Qurâ€™an is asking people to contemplate a number of phenomena in Allahâ€™s creation, including how mountains are set up. Such speculation has led to the theory of Isostasy which can explain how mountains are made to stand on the surface of the Earth. The Qurâ€™an reads:

In another verse "See you not that Allah sends down water (rain) from the sky, and We produce therewith fruits of various colors, and among the mountains are streaks white and red, of varying colors and (others) very black." (XIII), the Qurâ€™an describes mountains as being composed of white and red tracts of various shades of colors and of others that are black and intense in hue. This is probably referring to both continental mountains, (which are dominantly granitic in composition, with overwhelming white and red colors of various shades) and oceanic mountains that are dominantly composed of black colored, basic and ultra basic rocks. Each of these mountain types has got its specific rock (chemical and mineralogical) composition, as well as its specific origin. The Qurâ€™an reads:

"See you not that Allah sends down water (rain) from the sky, and We produce therewith fruits of various colours, and among the mountains are streaks white and red, of varying colours and (others) very black. And likewise of men and Ad-Dawabb {moving (living) creatures, beasts}, and cattle are of various colours. It is only those who have knowledge among His slaves that fear Allah. Verily, Allah is All-Mighty, Oft-Forgiving." (XIV);

In the last verse of this group, the Qur'an emphasizes the fact that mountains are non-stationary bodies that follow the movements of the Earth, as it reads:

"And you will see the mountains and think them solid, but they shall pass away as the passing away of the clouds. The Work of Allah, Who perfected all things, verily! He is Well-Acquainted with what you do." (XV);