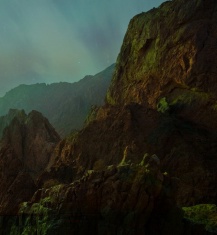 "God (his guidance) came from Teman, and the Holy One from mount Paran. Selah. His glory covered the heavens, and the earth was full of his praise."

The wilderness of Paran is where Abraham's wife Hagar and his eldest son Ishmael, the father of the Arabs, settled (Genesis 21:21) in the Arabian desert. Specifically, Makkah (Please see Map 1, page 440). Makkah is, of course, the capital of Islam in Arabia and the birthplace of Muhammad (pbuh). Indeed, it was Hagar and Ishmael themselves who transformed a barren patch of desert into what is now the capital of Islam, "Makkah." Mount Paran is the chain of mountains in that same region which the Arabs call the "Sarawat mountains."

According to J. Hasting's Dictionary of the Bible, Teman is an Oasis just North of Madinah. Muhammad (pbuh) did indeed come from Paran. About 622 AD, he and his followers were forced to migrate from Makkah (Paran) to Madinah (Teman) where he spent the rest of his prophetic life teaching it's people the guidance of God (the Qur'an).
These two cities, Makkah and Madinah, are such critical importance to a Muslims faith that every single chapter of the Qur'an is classified as either "Makkia" (revealed in Makkah) or "Madaniyyah" (revealed in Madinah).
When someone describes someone as having "come from" a certain town, this is usually interpreted as meaning that that person was born in that town. In other words, that town is this man's "home town." However, when one reads the words "God came from‚Ä¶," the meaning is quite different.
It is quite obvious that the verse is not implying that a given location is God's "home town." Jews, Christians, and Muslims all affirm that God Almighty is Omnipresent* and Eternal. So, if this is the case, then we can not say that God Himself "came" or "went" to a given place since that would imply that there are times and places where God's knowledge and supervision is NOT present, and thus, it is possible to hide from God since I could go to a place where God has not "come" and is not present in His knowledge.
So if God is Omnipresent (present in knowledge everywhere at the same time), then we begin to realize that it is not God "Himself" that is "coming" from a given place, rather it is God's guidance and mankind's recognition of God that is being established in a given location.
In other words, in a place where the true worship of God and the true knowledge of His message were absent, God blesses them with knowledge of Himself and His message. In this way, they become "acquainted" with God, and "meet" or "learn of" Him. In this fashion, although God Almighty was ever present in His knowledge, with them and all of His creation, they are only now beginning to comprehend His presence.
Once we understand that the people of Mount Paran and Teman are described as becoming aware of the message of God and His guidance, and we realize that Paran and Teman are to Islam what Jerusalem is to Judaism or Christianity, then we begin to see the emergence of a prophesy of the coming of the final message of God.
This is because Muhammad (pbuh) first received the prophethood of Islam in the cave of "Hira'a" located in the highest part of the mountains of Paran (see section 6.2). Jesus (pbuh) never in his life traveled to Paran nor Teman. Muhammad, however, was born in Paran, he became the prophet of Islam there, and it was the capital of the Islamic religion in that day and this. No man from Paran, throughout history, has had his praise sung in so many nations as has Muhammad (pbuh). The name "Muhammad" itself literally means in Arabic "The praised one."
Through the teachings of Muhammad, God is now being praised by over one billion Muslims around the world.
However, if we were to look more closely at this verse we would find even greater detail of this coming message. The word which has been translated here as "Holy One" is the Hebrew word "qadowsh" {kaw-doshe'} which has the multiple meaning of "sacred, holy, Holy One, saint, set apart." In this specific verse the translators judgment drove them to translate it as "Holy One" (notice the capitals), thus, they understood this verse to simply mean "God came from Teman and God came from mount Paran."
However, if this was the intended reading then why did God choose to use the word "God" in one place and "Holy One" in the other? There must be a reason for this specific wording. Actually, there is.

If we were to read Exodus 19:6 we would find that the same translators of the Bible have translated this same Hebrew word as "holy nation." In Exodus 29:31 it is translated as "holy place," and in Zec. 14:5 they translated it as "saints." Thus, we see that according to the witness of these same translators of the Bible, this verse of Habakkuk 3:3 could (or more correctly, should) be translated as "and the saint from mount Paran," or "and the holy one from mount Paran" (no capitals). This is important, why?

If we were to accept everything these Biblical translators are teaching us and to accept that the word "qadowsh" can be translated as "Holy One," or as "holy one," or as "saint," or as "holy," etc. based upon the meaning most appropriate for the chosen verse, then we realize that although it would be completely appropriate to interpret the coming of Islam from the mountains of Makkah as "the Holy One" coming from "mount Paran," still, it would be more precise to say that "the holy one" (or "the saint") came from "mount Paran." This is because Muhammad (pbuh) was born on Paran (Makkah) and first received the message of Islam in the mountains of Makkah.

So why does the first part of this verse say "God came from Teman" and not "The Holy One came from Teman"? Well, the reason for this is that Islam was indeed first revealed to Muhammad (pbuh) in Makkah, however, he and his followers remained persecuted and in constant fear of death from the pagans of Arabia while they resided in Makkah (see chapter 10). This continued for a period of thirteen years.
During this period, the Muslims were beaten, starved, tortured, and killed. This situation was hardly conducive of the Muslims openly preaching the message of God to all of mankind. For this reason, the knowledge of the persecution that one must endure upon acceptance of Islam prevented many from openly accepting it or preaching it to others.
However, this all changed in the beginning of the fourteenth year. That is when God Almighty commanded Muhammad (pbuh) to emigrate with his companions to Teman (Madinah). Although the pagans escalated their persecution of the Muslims into all-out warfare at this point, still, within the boundaries of the city of Madinah they had begun to enjoy a measure of freedom and autonomy.
This freedom manifested itself in their ability to not only preach the message of God within the city itself, but they also began to send delegations to the surrounding cities inviting them to Islam. In other words, the message of Islam did not truly begin it's "global" phase until it reached "Teman" or Madinah.
This is why the verse says "God came from Teman, and the holy one from mount Paran" In fact, just as the Christian calendar starts with the presumed date of the birth of Jesus (pbuh), so does the Islamic "Hijra" calendar start with the year in which the Muslims emigrated to Madinah.