A moving (living) creature on earth 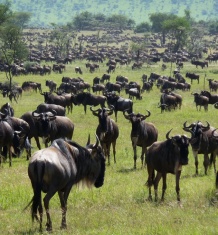 This ayah is found in the first quarter of Surah Al-Anāam (The Cattle) in the Qurāan.  It was revealed in Makkah. There are 165 ayahs in this surah. It was named Al-Anāam because of the mentioning of the cattle in this Surah as well as referring to one of the most important systems of classification of different forms of living organisms.
As other ayahs revealed in Makkah, this surah focuses on the Islamic creed (āAqeeda), as well as specific rulings. It also refers to other previous nations and how they responded to their messengers who were sent by Allah (SWT) to guide them. It mentions how those nations did not learn from the consequences faced by the previous nations due to disobeying Allah (SWT), emphasizing peopleās ignorance and their short-sightedness.
Signs of the creation mentioned in this surah:
Some interpretations of The ayah:
Allah (SWT) says what can be translated as:

Scientific implications in this ayah:
Biologists have discovered more than 1.75 million different types of species which exist on this earth and are living on land, at sea and in the air.  In addition, palaeontologists have discovered more than a quarter of a million extinct species.  Taking the average number of yearly discoveries, of new species, in these two fields into consideration, scientists estimate that the expected total number of different species present on this earth may be as high as 4.5 million.  Each of these species is probably represented by billions of successive and contemporary individuals.
It has been found that the life expectancy of each species ranges from 0.5 to 5 million years (an average of 2.75 million years) after which they normally become extinct.  The oldest fossil found on earth is 3.7 to 3.8 billion years old.  It is, then, evidently a near impossible task to discover every one of those billions of individuals out of those millions of species that ever existed or even exist on this earth no matter what advancements, knowledge, or means of calculations man has. This is why it became important to categorize them as the ayah, we are looking at, has done,

The ayah refers to the main type of classification which is the species. It is divided into groups which include numbers of this species living together in specific areas in the world, each forming a community of its own. For example, humans are divided into different races, each representing a population and all these different populations descend from one father, Adam (Peace and blessings be upon him) whom Allah (SWT) describes by saying what can be translated as:

āO mankind! Be dutiful to your Lord, Who created you from a single person (Adam), and from him (Adam) He created his wife [HawwĆ¢ (Eve)], and from them both He created many men and women; and fear AllĆ¢h through Whom you demand (your mutual rights), and (do not cut the relations of) the wombs (kinship). Surely, AllĆ¢h is Ever an All-Watcher over you.ā (II)

And He (SWT) says what can be translated as:

āIt is He Who has created you from a single person (Adam), and (then) He has created from him his wife [HawwĆ¢ā (Eve)], in order that he might enjoy the pleasure of living with herā¦ā (III)

And He (SWT) says what can be translated as:

The Prophet (SAWS) described the origin of human from one man by saying:

āYou are sons of Adam, and Adam came from dustā. (V)

āThere is not a moving (living) creature on earth, nor a bird that flies with its two wings, but are communities like you.ā (I)

This Ayah specifically says what can be translated as that every species of the living organisms, with its populations and individuals, is a special entity separated and isolated from other individuals, populations and species. Any similarities are within the individuals of the same species and do not in any way go beyond to any other species.
This is a reality which modern advancements in genetics, molecular biology and biochemistry have begun to clearly show. This fact was mentioned 1400 years ago in the Holy Qurāan which only re-affirms the fact that the Qurāan could only be the word of Allah (SWT) which He revealed upon His Prophet and Messenger (SAWS). No man could have ever produced it. It also proves that Allah (SWT) has protected every letter and word of it as He promised. He (SWT) kept it just as it was revealed in its original Arabic language for more than 14 centuries and will continue to do so until this earth and all that is on it returns back to Him (SWT). We thank Allah (SWT) for blessing us with the Qurāan and Islam.

"All the praises and thanks be to AllĆ¢h, Who has guided us to this, and never could we have found guidance, were it not that AllĆ¢h had guided us!" (VII)

Peace and blessings be upon the seal of the Prophets and the Messenger of Allah, who received the Holy Qurāan from his Lord (SWT), and passed it onto us with complete honesty, through his perfect character and morals, and it is all truth. Peace and blessings be on his beloved companions, family, pure wives and on all those who followed his guidance and acted upon it until the Day of Judgement.
(I): Surah Al-An'Ć¢m (The Cattle): V 38
(II): Surah An-NisĆ¢' (The Women): V 1
(III): Surah Al-A'rĆ¢f (The Heights): V 189
(IV): Surah Az-Zumar (The Groups): V 6
(V): Sahih Al-Gameaā Al-Albany No. 1787
(VI): Biology: Richard A Goldzbi, 1980, page 394
(VII): Surah Al-A'rĆ¢f (The Heights): V 43
Source: Dr. Zaghloul El-Naggar [External/non-QP]