A Religion of Natural Bridges 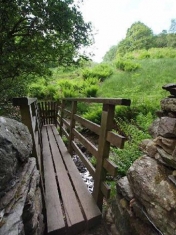 I was once asked to give a talk on building bridges between Islam and a certain Asian religion. My reply was that there was no need for such building because the bridges are already there; they are natural components of the Islamic religion.

I said this because the divine message which Prophet Muhammad was asked to convey, is a message to all human beings. It is not a message to this or that group of people at this or that particular geographical location or historical moment.

The Prophet is explicitly described in the QurŌĆÖan as being GodŌĆÖs final messenger to all people and a mercy to the entire world.

The fact that the religion of Islam is a universal religion is not a mere claim; there are characteristics in the religion itself that qualify it to be so.

It is a religion that is said to be a religion of fitra, (original good human nature), which means that everything in it has its roots in that original nature. It does not therefore invite people to any thing that is alien to them as human beings, nor does it invite them to it in ways that are unfamiliar to them.

Since rationality, in its broad sense, is a part of that nature, Islam addresses people as rational beings. The QurŌĆÖan emphasizes the fact that Islam is a message for people who understand, who reflect, who think, who ponder, who are wise, who are honest, who love the truth, and so on.

Because it is addressed to such people, it uses arguments and adduces kinds of evidence that are based on principles on which all people rely when they choose to act rationally in accepting or rejecting any claims in their everyday life .  The QurŌĆÖan asks of people to do no more than be consistent and use these same standards to judge religious claims.

When people choose to act rationally they accept the laws of thought and demand that statements be consistent; they accept the testimony of  empirical facts; they evaluate behavior according to moral values; they prefer the beautiful to the ugly; they choose the more prudent to less prudent.

The QurŌĆÖan uses these standards to argue for its claims, and to criticize false claims.

Rationality in this sense is the general bridge that Islam has with all people. But Islam has special bridges with people who accept some of its truths. It uses the truths they accept as premises from which it leads them to the rest of its truths through those rational arguments.

Let me now give you a few examples of these bridges, the general and the special. They are examples from the fundamentals of the Islamic religion.

The core of the Islamic message, like the core of all the messages with which true Prophets of God came, is that only the one God who is the only creator, should be worshipped, and be worshipped in the way prescribed by Him through His prophets.

To the minority of people who do not believe even in the existence of the Creator, the QurŌĆÖan has very simple arguments. One of them can be paraphrased as follows:

If temporal existents like human beings were not created by the eternal all-powerful Creator, how did they come to be? Did they come out nothing? Or were they the creators of themselves?

Any rational person can see with a little reflection that nothing comes out of nothing, and that it is a contradiction in terms to say that something creates itself.

To the overwhelming majority of people who believe in the existence of the Creator and who worship Him but also worship something else besides Him, it has a rational argument, which again can be paraphrased as follows:

Since worship is in its essence an expression of gratitude and since the Creator is the only one who provides people with all the bounties they enjoy, and since it is only He who has power over them, it is only he who should be thanked in any absolute way.

That is why Muslims are told to remind themselves of  this fact at the beginning of every one of the seventeen obligatory acts of bowing to God that they make every day. They declare:

All praise is to God, Lord of the all the worlds.

This argument of moving from the premise that God is the only Creator to the truth that only He should be worshipped is repeated in many ways in the QurŌĆÖan. Here is one example of two verses of the QurŌĆÖan that translate as follows:

O mankind! Worship your Lord, Who has created you and those before you, so that you may ward off evil, who has appointed the earth a resting-place for you, and the sky a canopy; who causes water to pour down from the sky, thereby producing fruits as food for you. And do not knowingly set up rivals to God.(2:21-22)

To those who believe in God and also in Prophets like Noah, Solomon, David, Moses and Jesus, the QurŌĆÖan says that they should not attribute to those blessed Prophets grave sins or false statements that they could not have done or uttered. Its argument for this is that the lord God who is all-knowing and Wise does not choose for conveying his message individuals who would commit those shameful acts or make those false claims because in this way they would be betraying the message rather than honestly conveying it.

It also tells them that one cannot with any consistency believe in any of those Prophets and deny others especially if that other is Prophet Muhammad. One Muslim theologian said that if one has one good reason for believing in the Prophethood of Moses or Jesus, one can find a hundred better reasons for believing in Muhammad.

The QurŌĆÖan gives many proofs that it could not be but the word of God.

One of them is the fact that it is internally consistent.

Had it been from other than God, they would have found many discrepancies in it.

The second is that it is externally consistent by which I mean that there are no factual mistakes in it.

The third is that it gives the true description of God as a perfect being, and of His Prophets as exemplary human beings.

To those who are not convinced and who want to persist in what Islam judges to be deviant ways, it says,

There is no compulsion in religion

You can live peacefully with Muslims so long as you do not resort to any acts of aggression.

These bridges, as you can see, are bridges between Islam and the best that is in human beings; they are not, as some want them to be, ways of compromising the truth and making it compatible with the transient cultural prejudices of particular times or places. A Muslim can be French or British or American; but there is no such thing as French Islam or British Islam or American Islam.